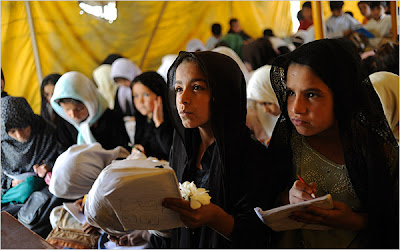 Afghan girls studying
There is a beautiful (and heartbreaking) article in the New York Times that I encourage EVERYONE to read called "The Women's Crusade" which is part of the Times Magazine's "Saving the World's Women" Issue. The article is quite long but definitely worth reading. Grab some tea (potentially some tissues) and set aside 20 minutes to read this astounding article. Here's just a taste:

"Our interviews and perusal of the data available suggest that the poorest families in the world spend approximately 10 times as much (20 percent of their incomes on average) on a combination of alcohol, prostitution, candy, sugary drinks and lavish feasts as they do on educating their children (2 percent). If poor families spent only as much on educating their children as they do on beer and prostitutes, there would be a breakthrough in the prospects of poor countries. Girls, since they are the ones kept home from school now, would be the biggest beneficiaries. Moreover, one way to reallocate family expenditures in this way is to put more money in the hands of women. A series of studies has found that when women hold assets or gain incomes, family money is more likely to be spent on nutrition, medicine and housing, and consequently children are healthier."
There are many excellent articles in this issue of the Times Magazine but the one with the most profound effect on me, a college educated woman, is called "A School Bus for Shamsia." The courage of these young Afghan women is absolutely inspiring:
"Women in Afghanistan are held to be lesser beings than men; they are accorded fewer rights and fewer opportunities. But build a school for girls, and the girls will come. They will face down death to come. And their illiterate parents will support them. Their illiterate parents will push them out the door."
Go here and do what you can to help women around the globe. It's 100% worth it.
Posted by Unknown at 2:48 PM